16 June 2021 With Steam Next Fest starting today and running through June 22nd, PC gamers are invited to get a hands-on preview with several of Headup’s upcoming titles. This will be the first time most of these games have been playable to both the press and public!

For more information, here’s a breakdown of each title:

White Shadows
White Shadows is an impressionistic, monochromatic puzzle platformer set in a dark, strange, and violent world. Play as the young Ravengirl trying to escape the shadowy metropolis in search of the legendary Tin Town, where the last free people live.

INDUSTRIA
Set in an alternate history East Berlin shortly before the end of the Cold War, INDUSTRIA is a surreal first-person shooter. On the evening of the fall of the Berlin Wall, a young woman plunges headlong into a parallel dimension to find her missing colleague who has disappeared under mysterious circumstances.

Escape from Naraka
Featuring actual Balinese artifacts recreated with 3D scanning technology, Escape from Naraka is a first-person survival platformer inspired by Balinese mythology, and a parkour-based platformer unlike any other. Just by playing you’ll automatically join a competition to win valuable Chroma peripheral prizes from Razer being offered to the top player!

Lost At Sea
Lost At Sea is a surreal first-person adventure about reclaiming your memories on the open water. Explore an island, where every biome represents a phase of your life. Face your primeval fears and take stock of your life through imaginative puzzles and fantastical scenery.

Gigapocalypse
Become a customizable giant monster in Gigapocalypse. Inspired by classical Kaijū affairs like Godzilla, King Kong, and Rampage, Gigapocalypse lets you control a giant Kaijū-inspired monster and destroy EVERYTHING in your way, all while listening to fist-pumping heavy metal music!

Enjoy these demos - and don’t forget to wishlist them if you’re interested in seeing more! Also, feel free to share your experience with us on Twitter and discuss the games on our Discord channel!
Read more

Become superior and destroy EVERYTHING this summer!

27 May 2021 We're thrilled to announce Gigapocalypse for PC, and the collaboration with solo-developer Goody Gameworks. Gigapocalypse is a 2D pixel art destruction game in which you can relive your childhood memories!

Every fan of the early days’ video game classic “Rampage” (and also of “Godzilla” and “King Kong”) should pay attention now: As a giant Kaijū-inspired monster – the so-called “Gigas” - you’re going to leave a pixelated trail of destruction in a variety of differently themed locations, accompanied by pumping heavy metal songs to make sure your destruction comes in style: https://youtu.be/r1NfK3FfnDE

Try – die – repeat: With each run your Giga will become more powerful until you reach the boss enemy in each location. The further you get in a level and the more you destroy the more mutation points you will get. Use the mutation points to upgrade your Giga with powerful mutations, skills, skins or even up to five cute yet evil pets at the same time which accompany you on your journey. You can even take care of your Giga in Tamagotchi-style mini games and decorate your Giga´s “home” with cool stuff that will also improve your Giga and make them more menacing.

Gigapocalypse will be released into Steam Early Access in summer 2021. The full game will feature nine different Gigas, each with their unique distinctive abilities and six beautifully detailed pixel style locations based on earth's historical and future timeline.

You can try a demo of Gigapocalypse at the Steam Next Fest on June 16th. Wishlist now on Steam!

Also, feel free to check out the game’s Twitter page and discuss with the developer on Discord.
Read more

26 May 2021 Headup is thrilled to announce the fast-paced first-person survival platformer, Escape from Naraka, which will make its way to PC in Q3 2021. It is developed by the Indonesian developer team Xelo Games, with a soundtrack created by Yohan Jager, known for his great work for Pumpkin Jack.

Escape from Naraka combines Balinese legends and mythologies with strong influences from games like SEUM: Speedrunners from Hell, DOOM, and Dark Deception. As you can see from the trailer, that makes for a very special experience: https://youtu.be/7EXfvm5Stq0

The game puts you in a nightmarish, labyrinthine temple dominated by an evil demon called Rangda the Leyak Queen. Using 3D scan technology for world-building; most of the detailed environment assets in the game exist in real life.

To save your beloved one, you’re going to platform your way through diversely themed platforming sections, each one challenging you with new deadly trials as well as traps and terrifying enemies. Developing the arts of dodging and perfect placed jumping is just one part of your successful escape. You also need to collect essential abilities and find the fastest way through the courses.

Compete with other players in the global Steam leaderboards - every level and every whole run will be recorded, so you can compare your records with those from other players around the world.

Wishlist and follow on Steam to receive a reminder for the upcoming Steam Next Fest demo on June 16th. Also, feel free to check out Twitter and discuss the game with the developers on Discord. We also recommend checking out this part from last week’s AHEAD live stream.
Read more

Crowns and Pawns: Kingdom of Deceit Headup Signs Its Next Point & Click Adventure

Headup’s next adventure hit for PC, following Trüberbrook and The Inner World

25 May 2021 After the success of The Inner World and Trüberbrook, Headup announced Crowns and Pawns: Kingdom of Deceit, their next beautifully hand-painted point & click adventure. Developed by the Lithuanian team Tag of Joy and led by the art director of Broken Sword 2.5, the game will take the players to a vivid modern Europe, zesting for life. The game will be released for PC, Mac, and Linux in 2022.

The story follows a girl from Chicago, Milda, who unexpectedly receives an inheritance from her grandfather – a house in Lithuania. She sets off to Europe, but an unknown stranger threatens her upon arrival, demanding that she give up her inheritance. Determined and intrigued, she explores the run-down house, discovering old documents and clues dating back to the 15th century. In no time, Milda gets dragged into a dangerous search for a long-lost mysterious relic.

The tech behind the game

”In Crowns and Pawns: Kingdom of Deceit, we use 2D hand-painted backgrounds that we project on a 3D world and blend them with 3D characters”, says game director Šarūnas Ledas. “As challenging as it may be, this allows having various visual effects in the game: smart lighting effects, real-time shadows, 3D depth effects (parallax), which react to the cursor's and the main character's positions in the scenes.” What’s more, many of the scenes in the game have various perspectives and camera angles, from traditional side view to top-down.

If you like to learn more about the game directly from the developers, you’re welcome to check out this part from last week’s AHEAD live stream. And of course, there is an announcement trailer, too: https://youtu.be/WJN6eDPBDxg

Wishlist now, and stay up to date by following Crowns and Pawns on Twitter and Discord!

The 3D Runner Aerial_Knight's Never Yield, created by Neil "Aerial_Knight" Jones, will be released today for PC, Nintendo Switch, Xbox Series X|S, Xbox One, as well as PS5 and PS4. The price on each of these platforms will be $ 11.99, € 11.99, and £ 9.99 with a 10% launch discount on Xbox, Nintendo Switch, and PC (Steam, Epic Game Store). The game will leverage Smart Delivery for Xbox platforms and Cross-Buy for PS5 and PS4. 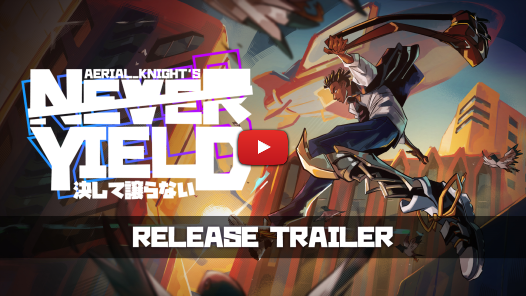 As one of the first games, Aerial_Knight's Never Yield is supported by SteelSeries GameSense, which can make your keyboard, mouse, and headset light up in fancy colorful ways, making Wally’s run even more enjoyable! Check out the pictures below, and you’ll immediately know what we’re talking about! More info on Steam.

The last time we told you will be able to get the game’s soundtrack on vinyl, but that was only half the truth: You can now pre-order the vinyl, but you can also get the soundtrack on several digital platforms. Please find the complete list here: https://ffm.to/aerialknightsneveryieldsoundtrack

Headup’s first official live streaming event called "AHEAD" will take place later today. Together with several developers, we’re going to celebrate the release of Aerial_Knight’s Never Yield, and introduce three exciting new masterpieces. We will also update you with more information and some release dates on the story-driven FPS Industria, the narrative adventure Lost At Sea, and our open-world sandbox game Tinkertown.

Tune in to AHEAD later today at 11 AM PST / 2 PM EST / 8 PM CEST on Twitch, YouTube, Steam, or FB Gaming and share some indie love via Twitter!  ❤️ 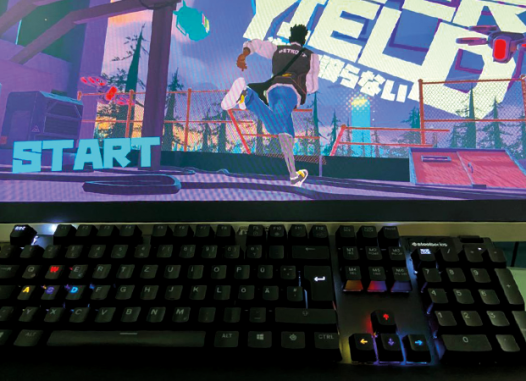 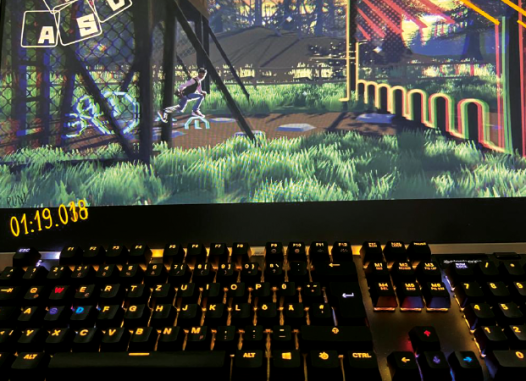 3D Runner Aerial_Knight's Never Yield Is Coming to Xbox One and PS4, too!

Owners of PC, Nintendo Switch and next-gen consoles won't be the only gamers to enjoy the upcoming 3D narrative runner game

Headup announced that the upcoming 3D Runner Aerial_Knight's Never Yield will be available for Xbox One and PS4 owners, too. Until now, the game from Neil "Aerial_Knight" Jones was announced for Xbox Series X|S, PS5, Nintendo Switch and PC only, with its release date on May 19th.

Aerial_Knight's Never Yield will be available on May 19, 2021. It will feature cross-buy for Xbox Series X|S and Xbox One as well as PS5 / PS4. It will also be available for Nintendo Switch and PC you'll find a demo on the Nintendo eShop (NA / EU) as well as on the game's Steam page. Stay up-to-date by following Aerial_Knight on Twitter and Discord!

The Whole Experience was Drastically Improved

29 April 2021 It's time for another round of Cardaclysm as its developer Ede Tarsoly used all the user feedback we gathered since the game’s release and revised a lot of elements:

The user interface received a big overhaul in many parts, there’s a new tutorial, new filter- and search functions, better balancing (in several respects) and even more loot in general!  ????
Sounds good, right? You can check out the update now, and even save money if you're going to buy it: To celebrate the update we lowered the price by 50% for 7 days!

In addition to additional languages (French, German and simpl. Chinese), the “Back to Nature update" adds many new "farm-tastic" features: players will finally be able to harvest crops and trees, go fishing and cook delicious meals! Those meals will also bring new buffs that make you harder, better, faster and stronger. (But beware! Enemies can weaken you with their own debuffs now, too!)

Tinkertown is funded by the Federal Ministry of Transport and Digital Infrastructure as part of the federal government's computer games funding program with a total of €153,669.

Check out Tinkertown on Steam!