13 September 2020 At this year's PAX Online, publisher Headup features its upcoming line-up virtually, that means you will be able to check out and play brand-new demos of Tinkertown, The Fabled Woods, TinyShot, Cardaclysm and Pumpkin Jack!

We will also feature live streams for all those games, plus INDUSTRIA. Check out the full streaming schedule:

Quick information about all featured games:

08 September 2020 Get a deep insight into the team at Bleakmill who are currently developing their first-person mystery shooter INDUSTRIA.

In their first development journal co-founder David Jungnickel and composer Lukas Zepf show what they are working on and talk about how story and music affects the players’ emotions, and what challenges they had throughout the last years:
Read more

04 September 2020 Together with developer Studio Erikson we announce the full Steam release of Doodle Derby, our devilish physics racing platformer for 1-4 players. Starting today, the game is also pre-orderable on the Nintendo eShop and will be available for Nintendo Switch on September 11th.

Anything is possible in the least realistic car game ever. In Doodle Derby you must build the track before trying to reach the goal of the level. Complete your new cool track additions and push your luck! Can’t do it? Rebuild it.

The game offers a single player campaign of ludicrous puzzle challenges next to some friendship-testing multiplayer modes, including the explosive tank mode. In multiplayer you must make a plan and wreck everyone else. Until someone has made it to the finish, the players are looping in a cycle of creation and destruction. Outsmart your opponents by building sneaky paths or outdo the others in cruel fashion. The most devious mind wins.

Building tracks in Doodle Derby is easy and quick, you can choose from the craziest track elements ever seen: Giant monkeys, UFOs, crushing sledgehammers, and much more. Because of the endless combinations and the (devilish) creativity of all players, no level is ever the same.

Award-winning mystery adventure ‘Trüberbrook’ out now for iOS and Android

Let the new Mobile Launch Trailer take you straight back to the 1960s!

The player takes the role of young American physicist Hans Tannhauser who dives into the everyday life of the eponymous village of Trüberbrook, an ageing but beautiful health resort somewhere in the densely forested countryside of West Germany. While actually on a holiday, he quickly finds out there is something strange happening here - and that he didn’t get there by accident...

With its superbly unique visual style, German charm, and a thrilling story of the likes of Twin Peaks and The X-Files, Trüberbrook comes as a modern adventure game appealing to fans of the genre and everyone who likes to delve into a Lynch-esque story and a unique artistic experience. The new Mobile Launch Trailer will give you the last pieces of information: 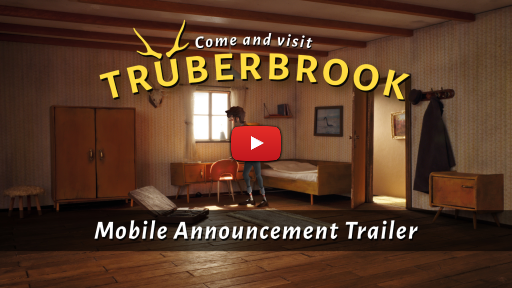 Trüberbrook is a two-time winner of 2019’s prestigious German Computer Games Awards, it received the ‘Best Staging’ award, and was also crowned with ‘Best German Game 2019’.

Produced by German-based production studio btf (bildundtonfabrik), mostly known for their current Netflix series “How to Sell Drugs Online (Fast)” and the German late night show “Neo Magazin Royale” with Jan Böhmermann, the sceneries are purely handmade, which means: Manufactured using real hands! And fingers. And masses of glue. To give the game its realistic look, they illuminated each scene in a cinematic way with real film-equipment lighting in different moods. These scenes were then subsequently digitized through photogrammetry and refined. Afterwards, the digitized world got further enriched by digital reflections, real-time shadowing, particle effects, and depth of view. Especially on mobile devices, Trüberbrook’s graphics are an absolute exception.
Read more

Let the dope-tastic soundtrack and stylized graphics get you in the flow!

01 September 2020 Headup announces Aerial_Knight’s Never Yield, a highly stylized narrative 3D runner game that was revealed for PC and next-gen consoles on IGN’s Awesome Indies Show on Saturday. The game tells the story of Wally who has just uncovered sinister evidence that might change his city forever.

Survive a futuristic Tokyo-style Detroit by running for your life, with the amazing soundtrack from "Danime-Sama", a Detroit artist featuring the authentic sounds of Detroit artists and vocals from “artists of colour” from all over the world.

Stay up-to-date by following Aerial_Knight on Twitter and check out the brand-new Reveal Trailer:
Read more

31 August 2020 Headup announces White Shadows in collaboration with games publisher Mixtvision and the media production studio Monokel. The extraordinary puzzle platformer is set for next-gen consoles and the PC in 2021.

White Shadows is a modern fable, a distorted mirror of our own world, funny, fucked up and a little meaningful.

Some time ago, the great war led to a plague which wiped almost all living things from the face of the earth. Or so they say. Nobody is safe outside the White City, and the birds are to blame for the plague. Or so they say. Only a shining coat of fresh white color will protect you from the plague, and you must earn your ration of color by staying obedient. Or so they say. But Ravengirl stopped listening.

Her escape pushes you deeper and deeper into ever more surreal parts of the city – slums constructed out of the remains of a circus, giant workers’ quarters which travel through the endless night, a perverted amusement park where white color flows endlessly, a forgotten place where the other outlaws gather around a tree made of tin.

On your journey into the darkness you will become the main attraction of the half-human, half-animal inhabitants of the city. You will catch up with your own past and become a victim, a perpetrator, a prophet. You will find the resistance hidden deep in the belly of the city and learn about the horrible truth of the white color and the world outside the city. Or will you?

Similarities to George Orwell's Animal Farm are intentional and cannot be dismissed. Without giving away too much, this dark world full of enslaved animal creatures deals with deeply ingrained civic issues such as social injustice, racism as well as a ruling class that tries to maintain its power through false reports, lies and violence after a worldwide catastrophe.

You control a small, lost Ravengirl through a dark, giant world of steel machines, production lines and propaganda. A world whose inhabitants were convinced that a layer of white paint would protect them from a rampant epidemic. A world in which everything has its assigned place and disobedience is bitterly punished.

In the game, escape sequences alternate with puzzles and classic platformer elements. The gameplay takes place in 2D, but the huge three-dimensional world offers breathtaking scenes, a variety of weird characters and devices vehicles that you’re able to steer through this bizarre world. 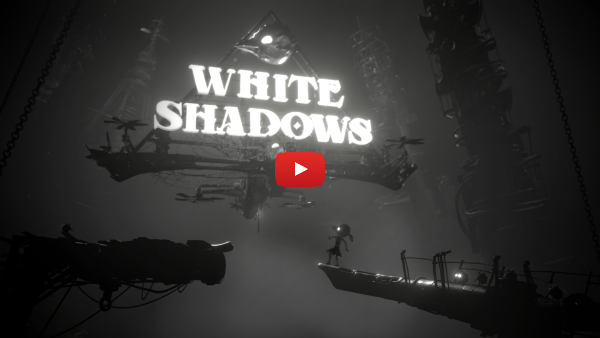 With White Shadows, the Germany-based developer studio Monokel is attempting a difficult balancing act: combining social criticism with entertaining gameplay; making worldwide grievances, such as the omnipresent systematic racism, a subject of discussion without being didactic; working artistically without wanting to be elitist. Or as the developers themselves put it: A game that deals with the world outside, but is accessible for everyone.

The game’s production history is closely linked to the history of the studio. Monokel was founded in 2015 with the idea of producing White Shadows. The idea for the game itself is much older - the first concepts date back to the founders' student days. The first prototype was made in 2016, then the game was put in the drawer - until it was reactivated in 2018. In the meantime, the Monokel guys have been working on various social and socio-critical projects - for museums, interactive applications and in the field of art.

But now the time has come: White Shadows will be released in the first half of 2021 for PC, PS5 and Xbox Series X. It’s published by Headup and produced by Mixtvision, known from games like Far: Lone Sails and Minute of Islands. More information can be found on White Shadows’ Steam Page, Discord and Headup's Twitter Account.

28 August 2020 You’ve built a zillion bridges. You’ve travelled with us to the middle ages. You’ve jumped through portals. Now it’s time to step up your game to the next level:

Over the last year, we have sheltered in our post-apocalyptic bunkers working closely with the folks at AMC on the next iteration of the Bridge Constructor™ franchise. Now, we are almost ready to unleash Bridge Constructor: The Walking Dead on all the fans and players of both iconic franchises.

And while it’s not quite time to reveal any game footage, we are thrilled to present the new game reveal live-action trailer, which made its debut at the Gamescom Opening Night Live presentation, hosted by Geoff Keighley.

Bridge Constructor: The Walking Dead will be released later this year across all major systems, including the next generation of consoles (PlayStation®5 and Xbox Series X), as well as PC, iOS, Android, PlayStation®4, Xbox One, and Nintendo Switch.


Experience the fun of KILLING WALKERS using the POWER of your BRAIN!

Join a group of survivors as they fight against hordes of undead walkers and a hostile human community. Build bridges and other constructions through bleak landscapes and ruined structures. Team up with fan-favorite characters like Daryl, Michonne and Eugene, and create safe passage for iconic vehicles from the series.

Use movable level objects, explosives and baits to your advantage as you lure walkers into lethal traps and guide your survivors to safety. Enjoy the physics-based frenzy and ragdoll animations as walkers succumb to the forces of gravity.

All other trademarks are properties of their respective owners.
Read more

We announce our first inhouse-production Tinkertown, A Sandbox Multiplayer RPG

27 August 2020 Today we announced Tinkertown as our first in-house product. For realizing the upcoming sandbox multiplayer RPG, the team at Headup was restructured in 2019 and expanded by an additional software developer.

Tinkertown features a procedurally generated open world, which can be explored alone or via simple drop-in-drop-out multiplayer with up to three friends online. Sinister dungeons offer an additional challenge with merciless battles, but reward the players with epic loot, which can be used for numerous crafting possibilities.

The game world captivates with handmade pixel graphics and offers a dynamic day and night cycle, creating a very special, magical atmosphere. There are various biomes to explore, such as mystical forests, vast deserts, chilling ice tundras and mountains with glowing rivers of lava. And above all that, you will find one thing: Loot, Loot, Loot!

Utilizing many resources as well as countless blueprints and crafting recipes, there are no limits to the design possibilities in Tinkertown. Besides tools, armor and different weapons, players can also craft furniture, workshops and machines. This way, a small village can rise from an initial hut in no time, and eventually whole settlements and impressive cities will emerge.

By equipping their character with different types of weapons and armor, each player experiences Tinkertown their own way - as a rogue, warrior, mage, or in a self-created role. Character specialization is especially useful, because in this colorful world many dangers are lurking: In addition to small enemies, which will make life difficult for the player on the overworld right from the start, powerful bosses are waiting in the combat-orientated dungeons.

Tinkertown will hit Steam Early Access in 2020, where it will receive its final touch with the help of the community. You can try the game already now, as there will be a first public demo available on Steam later today. In addition, Headup invites everyone to stay updated via Twitter, Discord or directly via the game’s Steam Page.

The ongoing project Fourest, in the meantime re-named as Tinkertown, is funded by the Federal Ministry of Transport and Digital Infrastructure as part of the federal government's computer games funding program with a total of €153,669.