The zombie apocalypse has arrived

07 September 2018 Dead Age, the tactical zombie horror RPG from Headup and Silent Dreams, is available now on Xbox One.

The game drops players right into the middle of a fierce zombie apocalypse, challenging them to rebuild society and make tough decisions while fending off hordes of undead in tactical turn-based battles. This combination and its unique atmosphere brought Dead Age great success on Steam and a "Very Positive" overall rating with over 2500 reviews in total. Thanks to the fantastic community support, Xbox One players are lucky to receive the best version possible, improved hand in hand with the players.

You control a group of survivors, execute dangerous scavenging runs, craft equipment and other useful things, build alliances and fight for survival on a day to day basis. Its round-based battles are inspired by classic RPGs: you can act strategically, use different skills and weapons and even plants bombs and traps. How will you protect your people from this thread?

Slime-san Level Editor - Create your own slimey levels for the world to tackle!

The Slime-san Level Editor is coming to Steam! (And most likely to Nintendo Switch™ too!)

28 August 2018 Still hungry for more slimy goodness? The next free Slime-san patch will be the ultimate solution to that. Yes, it's really happening: We're excited to announce the Slime-san Level Editor enabling you to create and share your own levels with your friends and the world! Browse and rate levels online or share them directly via ID code. And yes, the editor will feature full & friendly gamepad compatibility.

Slime-san's developers Fabraz teamed up with David Laskey, from TumbleSeed fame, to make this the best experience you could imagine. To top it all off Meganeko will be creating a new track while Del will delight us with another beautiful piece of artwork!

With this feature-filled level editor you'll truly be able to create and share your own unique levels and is estimated to release this Fall! The best part? We'll be releasing it as a standalone game as well on Steam!

Speaking of platforms, we're planning to add the level editor for Nintendo Switch™ as a free update, too! We will keep you updated.

Check out this teaser gif below:
Read more

17 August 2018 The past few weeks a lot has happened in our little Trüberbrook: Most of the villagers have been given their voices, all the houses, squares and secret science labs have been built and the team is about to go on a great journey... To give you an impression what the game looks and feels like, we have assembled our new "Interrogation Trailer". For this, we have only used hand-picked and unaltered ingame material. Have fun watching! We hope you like it!

The tape recorders are breaking into a sweat! We are happy to report that almost every character in Trüberbrook now has a voice. Altogether, we have recorded about 3200 lines per language. It's amazing to see (or rather hear) how the good people of Trüberbrook are now becoming real personalities

The tape recorders came in handy for a second time, when we went outdoors to record our first atmospheres and soundscapes in the wild. To create a world which is as authentic as possible, we'll have to wait until September for the very last recordings, in order to allow even the native autumn birds to find their way into the game.

Headup unleashes hordes of undead onto Xbox One, PC and PlayStation®4 with Hero Defense

Stop Lord Necrosis and his masses of enemies in this unique mashup of RTS, tower-defense and RPG!

16 August 2018
Headup and Happy Tuesday unleash the undead onto Xbox One, PC and PlayStation@4 today.

Hero Defense lets you create your own strategies to fight off vampires, skeletons, angry witches and many more gruesome creatures - with style!

It innovatively mixes together RTS and tower-defense game elements. In particular, RPG elements add enormous depth by providing players with a large variety of ways to improve the heroes' many abilities. Prove your tactical prowess by utilising the most effective combinations and create your own unique playstyle.

Check out the brand-new Release Trailer: 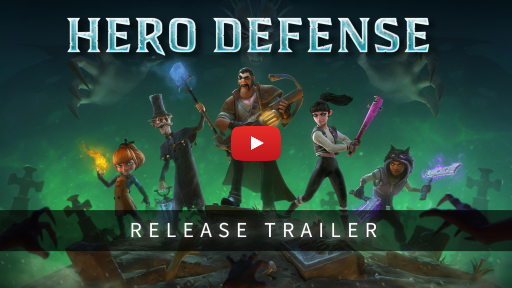 Help vampire hunter Jack Sanders and his tough group put an end to the undead scourge once and for all. Jack comes from an old noble family of vampire hunters who have fought the darkness for generations. But this quest is more than just business to Jack - this time it's personal!

Count Necrosis is none other than Jack's own father, who betrayed everything his family stood for by embracing the very darkness which claimed so many of the family's lives. In response, Jack swore to hunt down and kill Count Necrosis in order to redeem the family name. But when the time comes, will Jack be able to plunge a stake into his father's heart?

You will rebuild an entire town to get access to even more upgrades, advancements, skill trees, runes, magic spells and a whole arsenal of modifiable weapons. Figure out which combos work best for you, in Hero Defense the possibilities are limitless!

Due to its dark fantasy setting - including vampires, werewolves and Igors (assembled with love!) – Hero Defense will appeal to a wide spectrum of players as well as providing them with novel challenges. In addition, you will encounter bosses, such as Bones O'Malley and Doctor Amalgam, the Igors' creator.

All five heroes' abilities are tailored around their rich backstory, reflecting their individual personalities. Improve them in multiple ways to match your gameplay style. In the end, though your strategy skills will determine whether you succeed or fail: combine your heroes' strengths and coordinate their movements efficiently. Shrines and strong auras will serve as natural ideal spots whose usage will be inevitable to defeat the hordes of sinister enemies.
Read more

10 August 2018 After Runbow's recent digital release on the Nintendo eShop and on the PlayStation®Store, 13AM, Headup and Merge Games are excited to announce that the physical Deluxe Edition - including all DLCs - as well as two colorful sticker sets (for the EU version), are available from today onwards! The DLCs included are Satura's Space Adventure as well as all 4 costumes and music packs. The pricing of the Deluxe Edition will be €29.99 / £24.99 / $29.99 for both platforms, PlayStation®4 and Nintendo Switch™ - and it contains so much fun for the whole family! You'll also get it on Game Fairy including the soundtrack on CD as digi-pack.

About Runbow
The world of Runbow changes with each swipe of the background, so you'll have to stay on your toes as platforms and obstacles disappear - If you can't see it, it doesn't exist. Fast, frantic, and fun for up to nine players, Runbow is filled with tons of modes and content to keep you running back for more.
Metacritic Score: 80 of 100
Read more

This game will strengthen yours and your friends' ties!

07 August 2018 Following the recent launch of Runbow, Headup Games tied themselves together with Napalmtree and announce the next crazy party game for Nintendo Switch™: Tied Together! Played cooperatively with up to four players, the game brings hours of screaming and yelling!

The colorful platformer thrusts players --Tied Together by a tiny chain by the way-- into several tricky, cooperative, experimental set-ups which only scientists could possibly come up with. In these environments, your skills of cooperating efficiently will be tested to the max as you overcome various obstacles, balance passages and deadly surfaces like spikes or lava. Not only will your skills be tested here, but also the strength of your friendship…

One fine day a bunch of scientists created four tiny monsters. But for what? To test their cooperation skills of course! So they tied them together into a tiny monstrous chain and let them make their way through colorful, tricky, experimental set-ups which only scientists are able to come up with.

Complaining that the plot is as flat as 2D? Bullseye! You are right. The truth is: YOU are the monsters and WE are the scientists. Get tied to your friends and we will test your creativity and your ability to cooperate with each other! Think your friendship will stand this test too ?…

Single players don’t even stand a chance to handle the monsters' challenges. Also, it's a lot more fun to play with friends instead of playing alone, right? As a team you have to coordinate your movements, jumps and cling to the ground and walls in order to complete the levels and stay alive. It's not as easy as it sounds, but all the funnier! Every time your monstrous cooperative skills are not enough it will end in great chaos – and great laughter.
Read more

''In Between'', ''Toby: The Secret Mine'' and ''Super Blackjack Battle II Turbo Edition'' are coming to Nintendo eShop today!

07 August 2018 Headup will bring three new games to the Nintendo eShop today which couldn't possibly be more different from each other. Fans of platformer games especially can look forward to finally gettting their hands on both "In Between" and "Toby: The Secret Mine" for Nintendo Switch™. However, fans of challenging puzzles and artistic aesthetics will be equally delighted by them. For players looking to take some risks: "Super Blackjack Battle II Turbo Edition" will satisfy all your needs for high-stakes Blackjack action. Keep reading to find out more!


In Between - Indulge in hand-painted visuals as you embark on an emotional journey with physics-defying puzzles which will challenge you time and again to reflect upon your perspectives and the meaning of life and death. Unveil the story of a man who struggles for existence and help him come to terms with his own mortality and finiteness.

Toby: The Secret Mine - Experience beautifully handcrafted environments with shadow play aesthetics reminiscent of modern classics such as "Limbo" or "Badland". Help Toby to find out more about the mysterious intruders who attacked his village. Solve puzzles and overcome dangerous situations in a dark and mysterious world.

Super Blackjack Battle II Turbo Edition - Place your bets and raise the stakes. Your mission is to defeat all your opponents as you pave your way to become the best Blackjack player in the world.
Read more

Make the world a better place!

04 August 2018 The adventures The Inner World and its successor The Inner World - The Last Wind Monk will be released on Nintendo Switch™. After the initial success on other platforms, the beloved hero Robert, together with his friends Laura and Peck the pigeon, will embark on two journeys across the enchanting world of Asposia either of which you shouldn't miss.

In times of social and political turmoil - with questionable leaders and religious fanatics as well as negative thinking in general - the Inner World series might just be able to provide a positive point of view on these matters. Despite their fun and innocent surface, both The Inner World and The Inner World - The Last Wind Monk subtly address topics which resemble real processes disturbingly well.

But hey, listen, they are also great and fun games! This becomes clear if you take a look at all the awards and praise both games received for their earlier releases from the games press. From The Last Wind Monk receiving a Metacritic rating of 79 on PC as well as The Inner World winning the award for "Best German Game" (among other awards), these games are bound to be very enjoyable.