Since there's no pre-game inventory loadout in Super Treasure Arena, you pick up your weapons on-the-fly. Depending on which you'll find, you either shoot the hell out of your buddies or try to avoid direct confrontations, first focusing on treasures and smaller monsters. On top of that, each of the five characters has a unique special ability to turn the match around instantly. Either way, you need to grab coins and avoid being blasted by your "buddies". The action is non-stop and a ton of fun!

Just check the Nintendo eShop and have a look at the new Trailer: 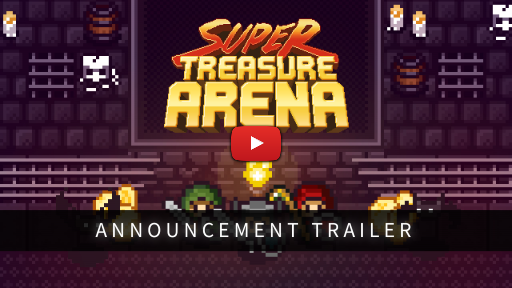 Super Treasure Arena is a unique mix of retro-inspired arcade action and objective-based arena shooters. The result is a frantic game where collecting and stealing loot from your opponents is the key to victory. Play alone or challenge friends locally via split-screen for 2-4 players!

ENTER THE ARENA
Choose one of four different characters (each with a unique special ability) and battle it out on tight top-down maps, filled with angry monsters and shiny loot. Various weapons scattered across each map can be picked up and will help you blasting away your opponents, including bows, magic staffs, bombs, rockets and more!

MULTIPLAYER MADNESS
There are two insane multiplayer modes for you to enjoy. Just hunt for the most coins possible locally against your buddies via split-screen!
Read more

When in Rome... Exorcise the hell out of people!

Test your multi-tasking skills with The Textorcist on PC

15 November 2018 How many things are you able to do at once? In The Textorcist you "only" have to do two things: type and dodge. Sounds easy enough in theory but proves much harder in practice. This game will put you to the limits of your cognitive and body coordination capacities.

You're Ray Bibbia, private exorcist and certified badass. Your mission is to rid the world of every evil spirit and send them back to hell. You banish them by typing out the holy passages from your book, down to the last letter.

Any spelling mistake you make will set you back, but to make things really interesting you also have to dodge your enemies' relentless bullet barrage at the same time. Welcome to (Bullet) Hell!

But obviously this is still not enough of a challenge for you, which is why later on in the game the texts will be in Latin, as is proper for such a holy man of the church as Ray Bibbia.

The Textorcist's release is planned for Q1 2019, but until then we will have a few surprises up our sleeves, so better stay tuned!

30 October 2018 We are excited to announce our upcoming charity collaboration with the Cancer Research Institute (CRI).

The collaboration starts on 1st November 2018 and will end on 31st January 2019. During this time span 50% of revenues from purchases for our game In Between on Steam, the Nintendo eShop, the Microsoft Store as well as iTunes and Google Play will go directly to the CRI. You can track the total amount of donations here.

Why In Between?
"The puzzle-platformer “In Between” illustrates the struggle of coping with death in a sensitive and emotional way. Based on insights from thanatology, the game carefully confronts players with the profoundly human inner conflicts experienced by the dying game character. Lying on its deathbed in a clinic, the character revisits periods of his life presented in fragmented memories, such as school graduation or the burial of a beloved person." - Red Dot Award 2014.

"What is outstanding about “In Between” is the idea of turning the topic of depression when facing death into a game play mechanism. The five psychological phases that the game character experiences are not only designed in different styles, they also require different ways of playing. The innovative approach turns this game into a true art project." - Statement by the Red Dot Award Jury
Read more

Become a hero and free the Tied Together lab monsters from their bondage!

19 October 2018 Today is your chance to become a hero! First, free the Tied Together lab monsters from the Nintendo eShop where they are currently imprisoned. Secondly, gather some friends and find your way out through several dangerous test chambers. As those little monsters are all tied together, the only way to overcome all obstacles and traps is working together as a team.

The game's developer Napalmtree created a hilarously fun party game which is played cooperatively with two, three or four players. But better warn your neighbors, this game will unleash hours and hours of screaming and yelling! (This was already proven at gamescom as well as some other expos.)

Just have a look at its new Release Trailer and you will understand why: 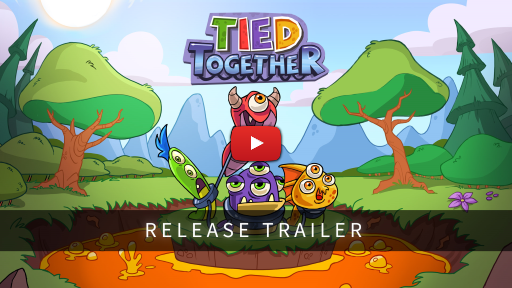 The colorful platformer thrusts players - Tied Together by a tiny chain - into several tricky, experimental set-ups which only scientists could possibly come up with. In these environments, your skills of cooperating efficiently will be tested to the max as you overcome various obstacles, balance passages and deadly surfaces like spikes or lava. Not only will your skills be tested here, but also the strength of your friendship…
In addition, it's a perfect game for families!

Tied Together is the next crazy party game for Nintendo Switch™, releasing today for a price of $14.99. Get it now from the Nintendo eShop: US / UK 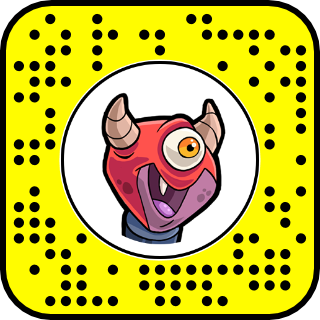 One fine day a bunch of scientists created four tiny monsters. But for what purpose? To test their cooperation skills of course! So, they tied them together into a tiny monstrous chain and send them on their way to make it through colourful & tricky, experimental set-ups which only scientists could possibly come up with.

Complaints that the plot is as flat as 2D? Bullseye! You are right. The stark truth is: YOU are the monsters and WE are the scientists. Get attached to your friends and we will test your cooperation skills and creativity! Your friendship might well just be tested too…

Single players don’t even stand a chance to handle the scientists’ challenges. Also, it's a lot more fun to play with friends instead of playing alone, right?!? As a team you have to coordinate movement, jumps and cling to the ground and walls to complete the levels and stay alive. That’s not as easy as it sounds, but all the funnier! And every time your monstrous cooperative skills are not enough it will end up in great chaos – and great laughter.

Plus: Insane Bridge Constructor Sale on Steam with 50-75% off!

But more importantly, players can finally delight GLaDOS with more SCIENCE by creating their own test chambers for other subjects to di... I-I mean.. test their creativity and ingenuity in! All levels created with the level editor can be ranked as well as uploaded on and downloaded from the Steam Workshop.
Read more

And there is a Steam sale as well: Get Grimmwood for 50% off now!

12 October 2018 We're happy to announce that the developers of Grimmwood launched a big update tonight, bringing various improvements to their game. Trading Card and Achievement hunters will be glad to hear that both are now implemented as well.

The greatly improved game is now discounted by 50% for a few days. You can also get the Grimmwood Supporter Pack including the soundtrack and digital artbook.

In addition to trading cards and Steam achievements, the update will give access to a wide range of new epic, rare and normal items and herbs, as well as new traits. A new performance bonus system will award the players for their ingenuity and effectiveness. The map navigation and exploration are made even easier with the Global Map filters. The icing on the cake though is the Extended Follow Mode allowing a single online player to control up to 4 offline players. Last but not least, Grimmwood is now localized in 3 additional languages – Russian, Chinese and Ukrainian.

For a more detailed list of all improvements please read the official patch log. Additionally, there will be a new explanatory stream with the developers themselves tonight at 11pm CET (3pm PST), directly on Grimmwood's Steam Page. Also, feel free to chat with other players and the devs on the official Discord Channel.

Watch the Trailer and see all key features at a glance: 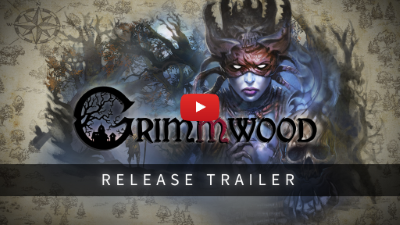 You’re in a village in an ageless, mystical forest, together with up to 40 other strangers all of which are real, live players. Together you need to defend your village against the merciless monster hordes who unleash their wrath against your shelter every night. Use the daytime wisely to explore, gather resources, upgrade and repair. But to be able to do all that you have to eat, drink and rest, because every action in the game takes its toll on your stamina and sanity.

Every night monsters attack your village. Use the daytime and your stamina points to explore the procedurally generated forest, find weapons and useful items, collect food and resources to upgrade and forficate the village. Share tasks and decisions with the other players and work together, because night by night the monsters attacks will become more fierce… And the village must survive at all costs!
Read more

Experimental specimens spotted on the loose in the vicinity of Headup Headquarters!

04 October 2018 These guys are prepared for anything

ATTENTION: Headup does not take responsibility for any injuries sustained while attempting to pacify the escaped specimens / employees. Furthermore, Headup confidently objects any claims or statements made by the escaped specimens / employees concerning inhumane or oppressing working conditions at Headup HQ - all employees took part in the project of their own free will and in contrast to any potential depictions made by the employees, were not at any point in time threatened, coerced, drugged or physically / mentally / emotionally manipulated into agreement.

Tied Together will come to Nintendo Switch™ on October 19.
Read more

This evil you cannot fight - run for your life and find a place to hide.

Using Unreal Engine 4, Silver Chains' graphics bring to life the hauntingly beautiful interiors of an early 20th century English manor. The Victorian architecture plays its part in creating an eerie atmosphere which will keep you on the edge of your seat as you unravel the mysteries of this place.

However, do not let the exploration and story aspects fool you into a false sense of security as the horrors of this house will hunt and find you as soon as you let your guard down. Throughout its course, Silver Chains will make sure to keep a steady stream of adrenalin pumping through your body!