22 July 2021 Headup is hell-bent on causing some havoc today! They have let loose a new 2D pixel-art destruction game, GIGAPOCALYPSE, inspired by classic Kaijū movies such as Godzilla and King Kong, and the legendary game series Rampage. For today’s Early Access launch, get a taste for destruction with the new trailer: https://youtu.be/myZlUYqaqgc

As you turn towering cities to rubble, a blood-pumping heavy metal symphony will accompany you, perfectly scoring the chaos of your very own monster apocalypse!

Now that Gigapocalypse has hit Early Access, all nine “Gigas” will slowly be added in the lead up to the final game. Each one will bring new powers, mechanics and deadly upgrades, increasing the scope for devastation. More locations will be added too, bringing the final tally to six stages set during the past, present and future - meaning your reign of destruction can span across time itself!

As a little kid, picking up your dragon toys, spewing fire, feels powerful and destroying everything is one of the best childhood memories for many of us. Now you become that giant monster in Gigapocalypse, a 2D pixel art destruction game, inspired by classical Kaijū movies such as “Godzilla” and “King Kong” and the game classic “Rampage”.

The game features a selection of different “Gigas” from the Prehistoric era, the uncharted outer space and the forgotten history. Each with unique skills, mutations and manifold skins that can be unlocked with level ups.

21 July 2021 Escape from Naraka is a unique first-person action-platformer with exotic Balinese themes, inspired by local mythologies and legends. Published via Headup, the small Indonesia-based development team, Xelo Games, will launch their game next Thursday, on July 29th.

Powered by Unreal Engine 4, players will encounter a beautifully created first-person action-platformer set in a gigantic Balinese temple including real statues, and inspired by real mythology, and creatures straight from legend.

If you’re going to play Escape from Naraka on a Nvidia GeForce RTX PC, you can enhance your experience with ray-traced reflections, ray-traced shadows, RTX Global Illumination and performance-accelerating NVIDIA DLSS! Check out these effects in action in this new RTX video: 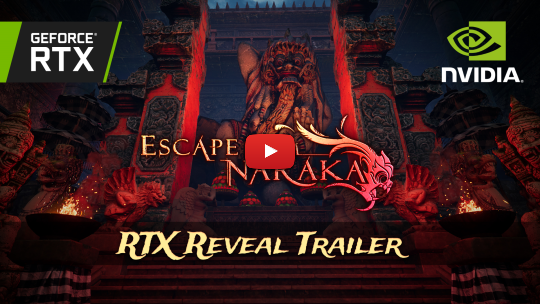 “It's a great honor to work with Nvidia. Like a dream coming true!”, adds Irfan Sarwono, Game Director of Xelo Games. “Since it's a mix of runner and platformer including Steam Leaderboards, and it is up to the player to achieve the best possible time, the extra FPS won't hurt. DLSS? Check! Ray-Tracing? Check!”

Wishlist now if you are a fan of games like SEUM: Speedrunners from Hell, Dark Deception, or DOOM! For more information, check out the official Twitter page and feel free to discuss the game with the developers on Discord.
Read more

Lost At Sea, Studio Fizbin’s New Narrative Adventure Game, Will Have You Reminisce About What Was and What Could Have Been

15 July 2021 We are happy to announce that the narrative adventure, Lost At Sea will open its beautiful, surreal islands today. Players can delve into an emotional journey about life, loss, love and reminisce about the past and future. Lost At Sea will be available for PC, Xbox Series X|S, and PlayStation®5 at a price of € 14.99. Steam users will receive a 10% release discount.

The story is about Anna, a woman in her mid-50’s. Thirty years ago, she met her husband, Andrew and they wished for a child, but that took way longer than expected. They had almost given up hope when it happened after all, and Danny was born. Sadly, nine years later, Danny died in a terrible boating accident with a friend. Years later after the tragedy, Anna also loses Andrew to early dementia. After Andrew nearly dies too, she becomes aware that she cannot provide the help he really needs. So, Anna leaves the house and starts processing her feelings on an island she created in her mind, similar to the one that cost Danny his life.

With Lost At Sea, Studio Fizbin created a game about universal themes focusing on life and death, coming to terms with your past and family. Set on a beautiful island, this game will force you to face your fears and take stock of your life through imaginative minigames and a relatable story. What are the most important moments of your life, and how do you want to live it?

Studio Fizbin are the critically-acclaimed creators of the beloved The Inner World adventure franchise and the studio behind the 2020 IGF honorable mention Minute Of Islands.

You can find Lost At Sea on Steam, the Microsoft Store, and the PlayStation®Store. Also, feel free to check out Studio Fizbin's Twitter page.
Read more

13 July 2021 Thogether with the development team Elder Games, we are pleased to announce the official release of Cardaclysm: Shards of the Four for Xbox One, Xbox Series X|S, and Nintendo Switch on August 13th.

Cardaclysm: Shards of the Four is a procedurally generated collectible card game with action RPG elements. Tinkering with magic and spells beyond his ability, a dark wizard accidentally unleashes The Four Horsemen of the Apocalypse and their minions. The only way to send them back to the fiery pit from whence they came is by battling through with over 240 cards and more that 40 artefacts.

After launching for PC in February, the game has been ported to consoles, and includes everything that can be found in the PC version, including all Early Access updates: Besides the 240+ cards and 40+ artifacts, you’re going to fight lots of enemies in 6 biomes and eventually face the fierce final boss in an especially deathly realm, filled with brutal creatures called “Agents of Death”. Only those who win enough keys are allowed to enter the final realm and face the ultimate boss: Death himself!

Cardaclysm: Shard of the Four will be available in English, French, German, Russian, Japanese, Korean, and Simplified Chinese.

Create your own monster apocalypse in this heavy metal arcade throwback

Today we announce the PC Early Access release date for their 2D pixel art destruction game Gigapocalypse. On July 22nd, those with an insatiable appetite for destruction can gorge themselves on the biggest monster mashup of the year.

Amplified by pumping heavy metal songs, players will control giant Kaijū-inspired monsters – the so-called “Gigas” – and leave a pixelated trail of destruction. As the Giga evolves, players will unlock powerful mutations, skills, and skins, or even the ability to spawn up to five cute yet evil minions which accompany the Giga on their destructive journey. Unleashing their destructive power on unsuspecting cities, will ultimately bring them face to face with fearsome bosses at the end of each level.

Take care of the Gigas with Tamagotchi-style mini-games and decorate their “home” to unlock more upgrades and make them even more menacing. The full game will feature six beautifully detailed pixel-style locations based on earth's past, present and future timeline, as well as nine distinct Gigas to bring on the monster apocalypse!

If this tickles your retro feelings, try Gigapocalypse’s Steam demo (available until Sunday 27th of June including Razer Chroma support) and wishlist on Steam to receive a reminder when the game becomes available.

On July 15th, reminisce about what was and what could have been.

23 June 2021 Headup announced the release date for their upcoming narrative adventure Lost At Sea for next-gen consoles and PC. Fans of unique adventure games, emotional storytelling and Studio Fizbin can look forward to Lost At Sea’s launch on July 15th.

Lost At Sea is a game about universal themes like life and death, coming to terms with your past and family. Set on a beautiful island, this game will force you to face your fears and take stock of your life through imaginative minigames and a relatable story. What are the most important moments of your life, and how do you want to live it?

With Lost At Sea, the developers are taking a whole new direction: psychological aspects, first-person gameplay, free exploration and, for the first time ever in their games, an omnipresent feeling of imminent danger.

Get ready to speed through a labyrinthian Balinese temple on July 29th with the Steam demo available to play now!

22 June 2021 Headup today announced that their upcoming first-person survival platformer, Escape from Naraka, will be released on Steam on July 29th. Excited fans can get a first taste of Naraka’s exotic atmosphere in the Steam Next Fest demo which is available for one more day. If you are fast enough, you can win valuable Chroma peripheral prizes from Razer for playing – more info is available here.

When the game releases, you will be able to compete with other players on the global Steam leaderboards - every level and every whole run will be recorded, so you can compare your times with other players around the world. And of course, the full version will feature full Razer Chroma support too, providing an additional layer of atmosphere.

Escape from Naraka combines Balinese legends and mythology with strong influences from games like SEUM: Speedrunners from Hell, Dark Deception, and DOOM. Speeding through a labyrinthian temple filled with Balinese mythology, trials, and traps makes for a unique platforming experience. The development team used real Balinese artifacts and 3D scanning technology to add the depth of Bali’s rich history to the game’s world.

For more information, check out the official Twitter page and feel free to discuss the game with the developers on Discord. Play the demo now and wishlist to not miss out when the game releases!
Read more

16 June 2021 With Steam Next Fest starting today and running through June 22nd, PC gamers are invited to get a hands-on preview with several of Headup’s upcoming titles. This will be the first time most of these games have been playable to both the press and public!

For more information, here’s a breakdown of each title:

White Shadows
White Shadows is an impressionistic, monochromatic puzzle platformer set in a dark, strange, and violent world. Play as the young Ravengirl trying to escape the shadowy metropolis in search of the legendary Tin Town, where the last free people live.

INDUSTRIA
Set in an alternate history East Berlin shortly before the end of the Cold War, INDUSTRIA is a surreal first-person shooter. On the evening of the fall of the Berlin Wall, a young woman plunges headlong into a parallel dimension to find her missing colleague who has disappeared under mysterious circumstances.

Escape from Naraka
Featuring actual Balinese artifacts recreated with 3D scanning technology, Escape from Naraka is a first-person survival platformer inspired by Balinese mythology, and a parkour-based platformer unlike any other. Just by playing you’ll automatically join a competition to win valuable Chroma peripheral prizes from Razer being offered to the top player!

Lost At Sea
Lost At Sea is a surreal first-person adventure about reclaiming your memories on the open water. Explore an island, where every biome represents a phase of your life. Face your primeval fears and take stock of your life through imaginative puzzles and fantastical scenery.

Gigapocalypse
Become a customizable giant monster in Gigapocalypse. Inspired by classical Kaijū affairs like Godzilla, King Kong, and Rampage, Gigapocalypse lets you control a giant Kaijū-inspired monster and destroy EVERYTHING in your way, all while listening to fist-pumping heavy metal music!

Enjoy these demos - and don’t forget to wishlist them if you’re interested in seeing more! Also, feel free to share your experience with us on Twitter and discuss the games on our Discord channel!